The Construction Users Roundtable (CURT) is an industry association made up of the largest commercial owners and big construction companies. Owner members include BASF, ExxonMobile, General Motors, Google, Honda, Procter & Gamble, and the US General Services Administration, among many others. Familiar names among contractor members include Graycor, LendLease, and Turner Construction. Given the size and profile of the major members, why don't architects and other design professionals even know it exists?

CURT was founded in 2000 to provide leadership on business issues faced by construction owners. Among other things, CURT represents "the Owners' voice" to the industry, promoting their interests on construction issues, provides a forum for sharing knowledge, and allows them to develop industry practices and expectations with respect to myriad challenges they face when developing very large projects ($1 billion and larger). Every year, CURT holds several member meetings and summits and one annual national conference. The most recent national conference, attended by over 500 people and held in Phoenix, wrapped up on February 12, 2020. The theme of the event was "Promises Made, Promises Kept." Attendees and exhibitors, other than the owners, included general contractors, technology vendors, design-builders of industrial equipment, labor unions, and other related associations.

What Happens at the CURT National Conference?

The CURT National Conference agenda offers multiple large-room presentations on a variety of topics. Some of the presentations were general business or inspirational sessions: Ross Shafer gave a talk entitled "How to Stay Relevant," Sage Policy Group's Anirban Basu offered an economic outlook, and celebrity chef Jeff Henderson told his story about overcoming poverty and being a federal prison inmate.

Other presentations included a talk about the supposed differences between different generations of workers in the labor force (hint: other than experience level, there aren't really any differences; baby boomers, gen-x and millennials are essentially the same), and an emotional talk by Cal Beyer on suicide prevention for construction workforces. Finally, there were several case studies of actual projects, including Constellation Brands' massive new Corona/Modelo brewery in Piedras Negras, Mexico, where they brew over 800 million gallons of beer every year.

While presentations occupied the bulk of the time, the real reason people go to the CURT National Conference are the many opportunities to network and develop business relationships. Each day there were several networking breaks held in the exhibit hall, meals and evening cocktail parties.

A Specifier at CURT

Conspectus, Inc., the nation's largest independent specifications consulting firm, attended the conference, its first foray into CURT. Foremost among their reasons for participating is that in addition to its work for architects, Conspectus offers its specifications services directly to owners, and where better to meet the largest and most active owners in the industry? If issues surrounding design documentation are being deliberated, either during formal meetings or around a lunch table, Conspectus is curious to know about them and has relevant experience and knowledge to contribute.

Conspectus participated in conversations including questions about how written design documentation becomes incorporated in a building information model, and then cataloged and delivered by project management software platforms. Other discussions covered how to enforce compliance with owners' design standards and how to maintain those standards in the first place. Others included ideas to achieve transparency between team members.

Conspectus has solved these problems. Patent pending Conspectus Cloud integrates all project information into systems and performance descriptions, integrating owners' project requirements with specifications in a single web-based platform. The tool makes all information available to the entire project team, enabling unparalleled coordination and collaboration. It allows informed decision-making for the owner's benefit. Because Conspectus Cloud is built on common database technology and uses Uniformat and MasterFormat® to organize information, it will interface seamlessly with BIM and PM software. Best of all, the Conspectus approach closes the gaps between the traditional project phases, maintaining a consistent flow of information from project inception through operation. 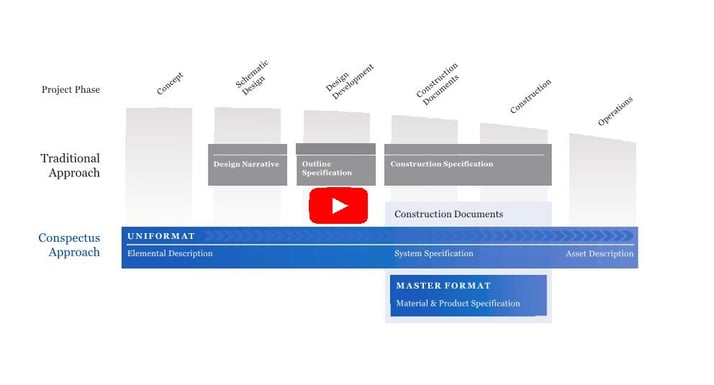 Encouraging Architects to be Represented

While it's reasonable to expect that architects, representing a third of the "OAC" triad, would be involved with CURT, only a couple attended (including Conspectus). Even the AE firms that work for the large owners do not join CURT, nor do they send representatives to hear their clients' concerns or represent the design team perspective. This seems crazy, but perhaps not surprising. CURT is a participant in ConsensusDocs, which compete with AIA contract documents, so why would AIA encourage architects to go to CURT?

As members of the construction industry seeking to learn the perspectives of their counterparts, make connections for their own benefit as well as contribute to the industry as a whole, the design professions should join, attend and participate in CURT. In addition, they should establish a committee to work with owners on improving communications and relationships between themselves and the other parties to a construction contract. Only then will the design community's voices be heard and their perspectives understood by the biggest players in the industry.

The theme of the event is an apt one. How does an industry with a reputation for chicanery and shenanigans create an environment where the parties have confidence in one another? Follow Ross Shafer's advice: People need to have empathy for one another, listen harder, act with honesty and full transparency, support one another, and respond urgently to any question or problem that arises. Those practices start and end with strong relationships, which just happen to be built when service providers and their clients spend time talking with one another.

Learn more about how we can collaborate to create value and reduce risk in your construction projects.