We are heading into the final game of the 2022 World Cup, and folks are placing their bets on Argentina or France. I want to take this opportunity to reboot a popular blog orginally published by Elias Saltz in 2018, because the content is still relevant.  In addition, we are excited to share our contribution to the World Cup as the specifier of the Al Thumama Stadium in Qatar.  In this update, let's explore some metaphorical similarities between the worlds of international soccer and the architecture/engineering/construction industry; and learn some fun secrets, plus lessons learned from Joe Minarik, the senior specifier of a high profile project on the world soccer stage!

Elias's observations - The most obvious metaphor is that both operate on a set of rules that are known to all of the players, and they operate under the assumption that the rules will be followed and enforced.  A World Cup soccer match often features countries whose players speak dissimilar languages and sometimes the referee speaks another, entirely different language.

Construction has developed rules that are similar across various countries and jurisdictions, especially when it comes to large projects employing multi-national teams of design and construction professionals.  The types of available building products may differ based on the project's location, but the drawings use similar conventions across project types and specifications describe work results no matter where the project is located.  Contractors follow rules laid out in the General Conditions and Division 01 specifications that dictate the processes that must be followed as the project progresses through construction, and these allow all the parties to the contract to expect the project to follow a predictable path.

Having rules doesn't ensure smooth sailing, but they do help limit the storms.  Rules are open for interpretation and abuse, but in limited ways.  Soccer players attempt to use the rules to tilt the result in their favor, famously using tactics like falling on the ground and writhing in ersatz agony to get the referee to declare a foul against their opponents.  Likewise, stakeholders in construction projects take advantage of the complexity inherent in the various aspects of construction contracting, drawings and specs to improve the outcome to their benefit.

Another metaphorical similarity is that in addition to rules of play, there are standards.  Every World Cup match is played with exactly the same model ball, and of course there are standards for the size of the pitch, the length of the grass, the goal opening dimensions, and the layout of the game lines. 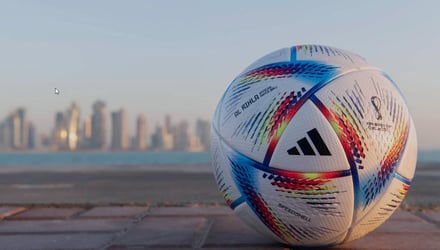 The analogies in AEC are that projects are constrained by codes that standardize many design options. Companies within industries form organizations that write voluntary product standards that are used to level the playing field, giving each company an even chance to sell products to a project.

For the 2022 games Adidas introduced a new model ball that responds to the speed of the game and how it is changing: "The game is getting faster and as it speeds up, accuracy and flight stability become critically important," said Franziska Loffelmann, the Design Director - Football Graphics & Hardware at Adidas.  A key feature is the CRT-CORE and the electronic technology within the ball.  CRT-CORE is the heart of the ball, which provides speed, accuracy and consistency for fast-paced action and precision, with manimal shape and air retention, as rebounce accuracy. (FIFA.com) The result is an elevated experience for the players and spectators. In a similar response to the A/E/C industry changes, such as speed of project delivery, Conspectus Cloud provides real-time collaboration and transparency in decision-making and management.  The result is transformation in document quality, team behavior and project success. In 2022 Conspectus began offering it to the entire industry to improve the experience for everyone involved on the project.  This coming year, the platform will be even more widely available through subscriptions.

Casual observers of soccer matches lack the knowledge and experience to understand the intricacies of the game, and probably are not be able to discern one set of tactics from another. They are capable of thoroughly appreciating a perfectly-placed pass, for example, but not the way the play built up to the point where that pass was possible.  Similarly, most visitors to a building are appreciating what they can see on the visible surfaces but aren't able to understand the technical work that was done to bring it all together.

Finally, international soccer has a collection of big stars that make the game great fun to watch.  Players like Cristiano Ronaldo, Lionel Messi, Kylian Mbappe, and many others all have the skill to make moves that dazzle fans and befuddle opponents.  For me and other once-every-four-years fans, watching the "regular" players is more enjoyable. They each have their defined role and they perform those roles with skill and dedication to their craft.

Star architects are analogous to star players; certainly they garner a lot of attention for their work, as well as some acclaim and an equal amount of controversy and criticism.  But most professionals in AEC are not stars, nor do we claim to have bigger, better ideas.  Instead, the industry is full of professionals working every day to perform various roles with dedication and the best experience and knowledge they can bring to their tasks.  At the end of the day, that is what makes the profession fun.

Joe Minarik's reflections - The glamour of working on a FIFA World Cup stadium comes when you're watching the games take place on your television screen, and you know the challenges have paid off tenfold.  Heerim Architects and Planners, from Seoul, Korea, engaged Conspectus to produce the specifications for the Al Thumama Stadium in Qatar in 2017. The dynamics of working with a global team on an international project built Joe's expertise in unexpected areas.  There were a number of learning curves to adjust to on the project, and understanding the standards and process of specs was the initial step. Simple elements, such as how materials are called out, took some time to get into the groove. The nomenclature for materials and methods used on the project took some adjustment as well. However, as a specifier, this challenge became the most fun. Joe gained exposure and exploration of new materials used in other areas of the world. One of the most interesting was the skin used on the stadium. The structure, inspired by the gahfiya - the traditional woven cap commonly worn by men in the Middle East, was wrapped in - PTFE (polytetrafluoroethylene). The manufacturer, Novum, provided design assistance with the documentation. Another interesting part of the documentation, was the Global Sustainability Assessment System qualifications, which was a first for Conspectus. The project earned GSAS 5 Star status for Design & Build, A* rating for Construction Management, and Gold status for Operations. All of the FIFA stadiums achieved the GSAS standards. 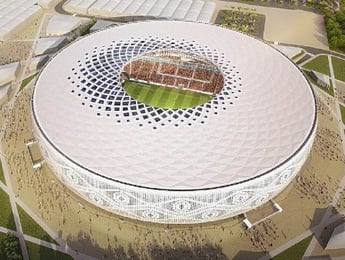 The most practical challenge of this project was the 12-hour time difference between Tuckahoe, NJ and Doha, Qatar. Collaboration is a typical hurtle, even among simple domestic projects. With the team spread across the globe, you can image the amplification. However, as the project progressed, Joe was able to work directly with AlJaber Engineering and Tekfen Contractors and the issues resolved themselves, and the process of creating the documents became easier. Unfortunately, the process began prior to the full implementation of Conspectus Cloud on all of our projects. Had Al Thumama kicked off in Cloud, the obstacles of time zones, international team members, and good old fashion decision making and communication would have been never been as challenging. The pleasure of working on this high profile project would have been experienced way before the start of the games.
Image from: https://parametrichouse.com/al-thumama-stadium/